I don't know how these artist/title mistakes get out there, but they do. iTunes has this listed as "Bass Kittens & Danja Koja" which is nice and generous but I sure never mentioned her name when I set up the release. Also the single was never called "Remixed by Volsoc". I learned long long ago that the music business is no place for people who are careful about details and like having their name spelled correctly.

Anyway, two of my attempts at being the Human League circa 1981 and two absolutely mind melting remixes by Volum and Justin Maxwell of Volsoc. I am really proud of this release. Justin did some fabulous artwork for the vinyl, which is unfortunately not being used online. It shows a creature made up of volleyballs and socks (volsoc, get it?) beating up a creature made out of cats and subwoofers. 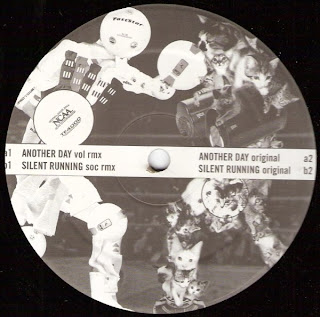 This was issued on regular black vinyl and then re-released later on clear vinyl.  I've never ever seen the clear vinyl version, and needless to say I've never seen a penny of the vinyl sales either.

Buy it:
Addictech
iTunes
Amazon
Posted by jsd at 4:54 PM